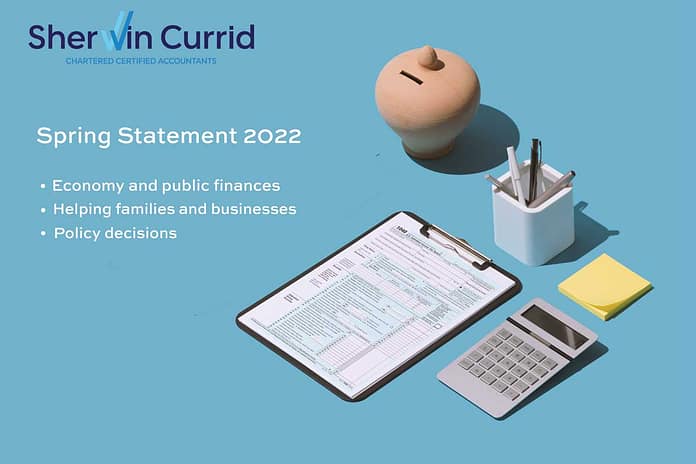 Spring Statement 2022 takes place following the unprovoked, premeditated attack Vladimir Putin launched on Ukraine. The invasion has created significant uncertainty in the global economy, particularly in energy markets. The sanctions and strong response by the UK and its allies are vital in supporting the Ukrainian people. But these decisions will inevitably have an adverse effect on the UK economy and other economies too. Higher than expected global energy and goods prices have already led to an unavoidable increase in the cost of living in the UK. The repercussions of Putin’s invasion of Ukraine will add to these pressures and increase inflation further in the coming months, with the long-term consequences not yet being clear.

As a result, the uncertainty surrounding the Office for Budget Responsibility’s (OBR) spring economic and fiscal forecast is higher than usual. The UK economy has emerged from the pandemic in a strong position to meet these challenges. The success of the government’s COVID-19 vaccine rollout and the Plan for Jobs have helped support a quicker than expected recovery and a strong labour market, with the total number of payrolled employees now over 600,000 above pre-pandemic levels. Tax receipts have been stronger than expected, which has contributed to borrowing falling this year and over the forecast period. The improvement seen in the public finances has created additional headroom against the government’s fiscal rules.

Which the government has prioritised using to deliver reductions in tax. The government has already taken significant steps to help with the cost of living. This includes a cut to the Universal Credit taper rate and increases to work allowances to make sure work pays; the £9 billion package announced in February to help households with rising energy bills this year; and freezing alcohol duties and fuel duty to keep costs down. The government is taking further action in the Spring Statement to help households.

A significant increase to the National Insurance Primary Threshold and Lower Profits Limit will allow hard-working people to keep more of their earned income. A temporary 12 month cut will be introduced to duty on petrol and diesel of 5p per litre, representing a saving worth around £100 for the average car driver, £200 for the average van driver, and £1500 for the average haulier, when compared with uprating fuel duty in 2022-23. To help households improve energy efficiency and keep heating bills down, the government will expand the scope of VAT relief available for energy saving materials and ensure that households having energy saving materials installed pay 0% VAT. Small and medium-sized enterprises (SMEs) are also affected by rising costs.

The Spring Statement builds on previously announced support for SMEs, including business rates relief worth £7 billion over the next five years; increasing the Annual Investment Allowance from £200,000 to £1 million until March 2023; subsidising the cost of high-quality training through the Help to Grow: Management scheme; and helping firms to adopt new digital technologies with Help to Grow: Digital. Businesses will also benefit from the cut to fuel duty. And the Employment Allowance will increase to £5,000 from April – a tax cut of up to £1,000 for around half a million small businesses. 2 Spring Statement 2022 The government has taken the responsible decisions needed ahead of the Spring Statement to strengthen the public finances.

Which has created the space to provide this extra support. The Spring Statement confirms that after providing this support the government continues to meet its fiscal rules, with an increased margin of safety. Underlying debt is falling as a percentage of GDP and the current budget is in surplus in the target year. Preserving fiscal space is vital given the increasing risks from global challenges and the level of uncertainty in the economic outlook.

Aiding families to pay for the costs of living. This Spring Statement increases the annual National Insurance Primary Threshold and Lower Profits Limit from PS9 880 to PS12,570 from July 2022. This will align the Primary Threshold as well as the Lower Profits Limit to the personal allowance for income tax. This will aid nearly 30 million workers and a typical worker receiving the tax reduction of PS330 starting in July.

* Boosting productivity and growth by creating the right conditions for businesses to invest more. Learn more and invent more, thereby fostering a new business culture. To achieve it, the government plans to reduce. Reform the taxation of businesses, in order to foster an environment of business and to create the conditions for growth driven by the private sector.

* Distributing the profits of growth in a fair manner. The government is reducing the base rate of the tax on income to 19% beginning April 2024. This represents a tax cut that is more than PS5 billion annually. Is the first cut in the base rate of income tax in the past 16 years. Alongside tax cuts, the government also wants to make the tax system simpler. Fairer and more efficient, and will confirm plans for reforms to reliefs and allowances ahead of 2024

Growth and the labour market

What is Chugy? Everything you Need to Know